Verdon and its marvelous lavender landscapes 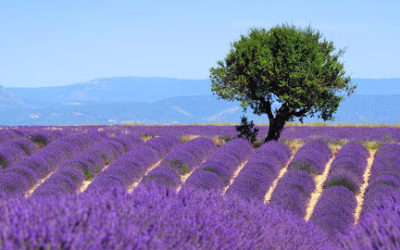 The Verdon is surrounded by lavender landscapes. It has existed for more than 2000 years on the shores of the Mediterranean. In France, it is cultivated only in the south-east. In the three departments of the Alpes de Haute Provence, the Drôme and the Vaucluse. It normally flowers from mid-June to mid-July on the Valensole plateau but can last until mid-August in the Dignois and Haut-Verdon regions.

It was already praised for its medicinal properties in Antiquity. Lavender essence was also used to maintain the body. His first name; “Lavandula” is then synonymous with body care and cleansing. This plant which particularly appeals to the aristocracy will gradually become popular thanks to cosmetics. It distilled in quantity from the 16th century and gave birth to luxury perfumery from the 19th century.

“True” or “fine” lavender is more noble than lavandin. It grows between 500 and 1000 meters above sea level and has a long branch with a single flower spike. The fine lavender essential oil from Haute Provence has been classified AOC since 1981.

Lavandin is a hybrid of fine lavender and aspic lavender. The result is a branched branch with three ears larger than fine lavender. Lavandin therefore has a higher yield but has a lighter fragrance than fine lavender. It is harvested every year from the second half of July. A more productive process that allowed the era to meet the high demand from perfumers in Grasse.

Lavender landscape; The Valensole plateau and its blue golden sea

The clay-limestone plateau of Valensole is an ideal place for the cultivation of lavender. It also combines other advantages such as altitude and climate. The Valensole plateau is considered to be the largest lavandin production center in France. Come admire these expanses of lavender which undulate like little oceans. Local bees gather mainly blue flowers and thus make lavender honey. A product widely used on the shelf.

lavender landscapes gave rise to lavender festivals. They have sometimes existed for several centuries. This is where all the players in the lavender world met once a year. These festivals therefore had as much an economic as a social interest. They still exist today, not to be missed if you are in the region. Old stills, essential oils, honey … the world of lavender is yours!

The Lavender Corso in Digne. A party that lasts 5 days and has existed since 1939.

Lavender festival in Barême at the end of July

The lavender fair at the end of August in Digne