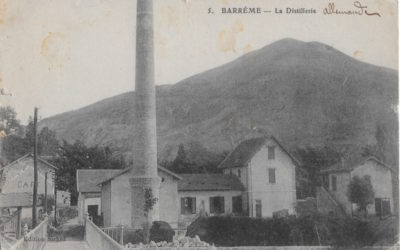 At the end of the XIXth century, the essence of lavender took a very important development. All of Haute Provence is thus embarking on production. Barrême fine lavender is then recognized for its quality. Barrême is gradually becoming an important center for collecting lavender and producing gasoline.

Today converted into a distillery museum, the Schimmel distillery was built in 1905. In addition to lavender, it also distilled mint and cypress leaves. Schimmel, a German entrepreneur based in Miltiz-Leipzig, felt the need to produce his lavender essence himself. In fact, at that time, brokers acted as intermediaries between producers and perfumers. As the quality of petrol becomes an issue on the market, Schimmel makes the first attempts at steam distillation. He then highlights the concentration of linalyl acetate as a qualitative indicator of the essence of lavender. This indicator will quickly become the sole benchmark for lavender essence.

In addition, Schimmel demonstrates that steam distillation is faster than traditional distillation over open fire. Also, steam distillation produces an essence highly concentrated in lynalyl acetate. However, this process requires heavy investments which require high profitability. As the article published in May 1913 in “Les Marches de l’Est” recounts, the establishment of a German industry in France at this time was not very favorably viewed. Schimmel he odiously speculated on the price of lavender? It seems that the problem was not really there. In 1914, Schimmel will be expropriated and the distillery sequestrated.

Schimmel’s process is celebrated in 1920 by a study by the Ministry of Commerce and Industry. It promotes modern agriculture. An agriculture that favors species with a high content of lynalile acetate. In order to control the quality of the essence and the price of lavender, the perfumers from Grasse came to set up their distilleries in Barrême. Near Grasse, connected by train and producing fine quality lavender, Barrême was an asset for the perfumers from Grassois. Five distilleries were operated in Barrême from 1920 by the most important perfumers. They thus took economic control of Barrême, the capital of lavender.

The decline of Barrême occurred a few decades later with the cultivation of lavandin in the west of the department, especially on the Valensole plateau.