Moustiers-Sainte-Marie and the legends of the star 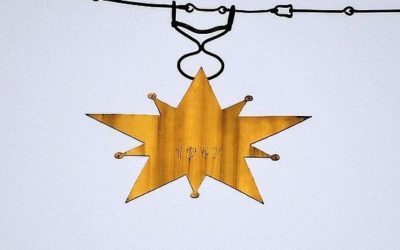 Moustiers-Sainte-Marie, one of the most beautiful villages in France

There is evidence of the presence of man since prehistoric times. The village in the lines we know today, was founded in the 5th century by some monks. At the crossroads of the Gorges du Verdon, Moustiers-Sainte-Marie is today perceived as one of the most beautiful villages in France. To this, add the charm of Provence, its lavender, olive trees … and the setting is heavenly. From the village, you can also access some adventure trails. Standing at the foot of imposing cliffs, you can visit Moustiers-Sainte-Marie in the sandstone of its few alleys overflowing with merchants and history.

The village made its reputation in particular thanks to earthenware in the 17th and 18th centuries. A tradition that is still perpetuated today since the village still has a dozen workshops. But also many stores in summer.

The legends of the star

The star of Moustiers-Sainte-Marie hangs on a chain 135 meters long. Stretched between two cliffs about sixty meters above the village. Over the centuries, we forgot the origin and the meaning of this star. This gave rise to some tales and legends.

Among the legends of the star, the most widely distributed being that of the Chevalier de Blacas. Blacasset, grandson of the great Blacas de Blacas the troubadour warrior. A French nobility family which had its stronghold around Aups. He went to the crusades and was taken prisoner by the enemy. Blacasset then swore to hang a sixteen-pointed star, a symbol of his family above Moustiers if he saw his country again. The current star, covered with gold leaf, has only ten branches. Indeed, we learn from the village registers that it has already fallen a dozen times over the past centuries. This legend is in fact a pure fiction of the poet Frederic Mistral and does not reflect any historical link.

Another legend reports that young lovers from enemy families committed suicide in these places so as not to be allowed to love each other. The two grief-stricken families put the chain down and reconciled.

We are talking about the Three Kings but also the Templars who left a clue to find the treasure they were going to hide in the mountains … There are close to twenty legends today around the chain of Moustiers-Sainte-Marie .

Come see it and invent your own!