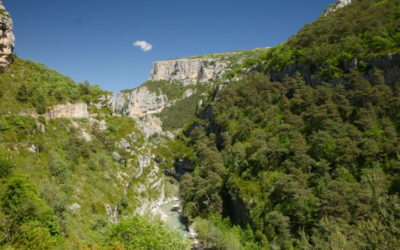 “Climatic changes”. Words that we hear a lot these days unfortunately .. Between 2017 and 2018, we could note some climatic changes in the Verdon. Would this valley distant from the industrial world be affected by such whims of nature?

This year, with a generous winter in snowfall, until the end of May, we could see the snow-capped mountains. Especially from Castellane to the Rafting embarkation. Suffice to say that the water reserves were already well assured. Thereafter, the cool temperatures and the heavy rains of spring allowed a gradual melting. This ensured a constant level in the Verdon for Canoe and Rafting.

Note that it rained then it rained … Number of sessions we did under the deluge. It’s always part of the adventure and then, wet for wet.

We were asked a lot for the activity Aqua Trekking during this period. However, the first trips were made this year, only from the second week of July. An exceptional fact when you know that last year for example, they had started in May.

Indeed, it had already rained more than normal in May-June. So we thought it would calm down in summer .. Not at all! In July and August, a thunderstorm hit the valley every two or three days. Note in passing that when this happens, communications on mobile phones are interrupted until the next morning. What complicates things a little when you have a number that starts with 06!

The days of water were therefore linked almost continuously. Remember that “water day” on the Verdon means that the dam is open. It then delivers a sufficient volume of water to allow to descend with small and large boats. Three, sometimes four days of water a week! With a flow approaching thirteen cubic meters per second. What changes enormously from the ten cubic meters per second delivered generally in summer.

For more than 20 years that I’m near the Verdon, 2017 remains the driest summer I’ve ever known and 2018, the rainiest … Two extremes in two years.