The Grand Canyon du Verdon, the largest canyon in Europe 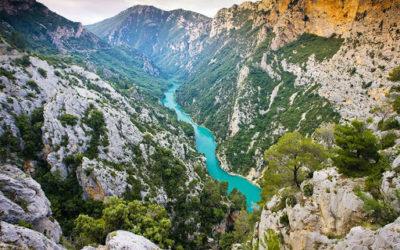 The Grand Canyon du Verdon is inseparable from the river that flows through it; The Verdon

The Verdon, this emerald river which makes so much dream.

From the Col d’Allos where it has its source to the Var commune of Vinon-sur-Verdon, where it flows into the Durance, the Verdon covers about 170km. It crosses 32 communes and 3 departments, the Alpes-de-Haute-Provence, the Var and the Bouches du Rhône (confluence with the Durance).
On its passage it sublimates all the places it meets. From Castellane, after the artificial lakes of Chaudanne and Castillon, the Verdon escapes into the Gorges du Verdon, classified as a Grand Site de France. Then it makes its way into the Grand Canyon du Verdon, before finishing part of its course in the Lake of Sainte Croix, in Moustiers-Sainte-Marie. It is from there that the low Gorges begin, where the Verdon flows a peaceful retirement before throwing itself into the Durance.

The course of the Verdon is not always restful, it evolves with the rhythm of the seasons. The hydrometry of the river is managed, since 1948, by hydro-electric dams. Castillon and Chaudanne upstream, then by the dams of Sainte-Croix, Quinson and Esparron downstream. The flows can vary from 1m3/s to 40m3/s. In 1994, a flow of 1000 m3/s caused a devastating flood for the region.
Other actors such as tributaries sometimes modify this flow. Many of them end up in the Verdon river. We will remember the Jabron, the Artuby and the Lance.
It will not have escaped you, the Verdon is remarkable by its color, from which it takes its name. This blue-green, pulling on the turquoise and emerald blues, has always made its reputation. It owes this to its clayey bottom, to the presence of micro-algae and fluorine.

The Verdon through time

t all begins during the geological period of the Triassic. 210 million years ago, during the Mesozoic era, Provence was covered by the sea. Thus, the Verdon territory is composed of several thick layers of limestone populated by ammonites. Many fossils can still be found all along the Verdon (their extraction is forbidden because we are in the geological reserve of Haute Provence).

140 million years ago, during the Jurassic period, the sea bed rises, the water warms up and favors the appearance of corals. This is how the Gorges du Verdon were born.
In the Cretaceous period, during the Tertiary era, due to the formation of the Alps, the sea recedes, Provence rises and leaves an aquatic landscape dotted with lakes.

65 million years ago, tectonic movements appear. They caused fractures in the Jurassic limestone rocks and created the valleys of the Verdon region.
In the quaternary period, the ice ages and the drying up of the Mediterranean Sea will accelerate the erosion. At the same time, the Verdon river takes in force and continues to dig more and more strongly its bed and the gorges by strongly notching the massifs formed in the Jurassic.

The Verdon river, for thousands of years, has dug and created the largest and deepest canyon in Europe, which we know today as the Grand Canyon du Verdon.

The Verdon river, for millennia, carved out and created the largest and deepest canyon in Europe, which we know today as the Grand Canyon du Verdon.

The Grand Canyon du Verdon, figures that speak for themselves

After millions of years of “construction” the Grand Canyon du Verdon is the largest and deepest canyon in Europe in the Provence region.
While it really begins at the Tusset bridge, in the commune of Rougon, it extends over more than 50km to the Sainte-Croix lake, in Moustiers-Sainte-Marie.
The height of its limestone cliffs varies from 250 to 700 meters. Its size is also surprising, going from 6 to 100 meters wide.

At the beginning of the canyon, in its first narrow passage called “Le couloir Samson”, you will discover La Baume aux pigeons, a naturally dug out cave with a special atmosphere. You can discover it during your half-day aquatic hike!

Further downstream, it is the emblematic “Styx”. A kind of canyon within the canyon. In Greek mythology, the Styx means river that leads to the underworld. This can be explained by this steep and narrow branch where only the Verdon can slip through.

The imbut, famous path in the Grand Canyon of the Verdon. It means funnel in Provençal. Indeed, this passage is narrow and the Verdon seems to disappear in a rocky chaos.

Its flora, protected, is very rich. There are holm oaks, beeches, maples, yews, several species of junipers, etc.
It also hosts a unique endemic fern: the Doradilla of the Verdon. It is strictly localized in this region where it can benefit from an ideal biotope to proliferate: humidity, shade and rocky cliffs.
Its fauna is also exceptional. Wild boars, roe deer, foxes, squirrels, share these limestone cliffs. Reintroduced in the 19th century after their disappearance, nearly 300 black vultures, griffon vultures and Egyptian vultures now enjoy the canyon by soaring over its vertiginous cliffs. It is also home to more discreet species such as golden eagles and chamois.

Climbing. Initiated by Patrick Edlinger since 1975. The limestone cliffs of the Verdon are a real playground for climbers from all over the world. Indeed, there are no less than 900 climbing routes in the gorges and canyon of Verdon. It is one of the most beautiful climbing sites in France.

Mythical hikes. One thinks immediately of the Blanc-Martel trail which offers 16km of walking in the heart of the Grand Canyon du Verdon. The paths of the Imbut (emblematic passage in the canyon) and of the Vidal also offer striking discoveries.

By bicycle. Take a bicycle (rather electric…) and go on the route des Crêtes. Located on the right bank of the Verdon, ride along these 23km of road overhanging the Grand Canyon du Verdon. You will be able to take advantage of remarkable points of view to contemplate and become aware of the beauty and the size of the site.

Our activities are open to all. However, we ask all participants to respect the following prerequisites:
Know how to swim and be comfortable in the water
Not have any medical contraindications for the practice of sports (heart disease, recent injury/operation, back problem, etc)
Inform your guide before the activity if you suffer from any illness (asthma, allergy, etc.), or any other disability.
Respect the minimum ages according to the activities.
Minors must be accompanied or have parental authorization.

REGISTRATION / RESERVATION
All reservations can be made either by phone or by email.
No reservation is validated orally.
Your reservation is effective only after reception of a confirmation sms/email and the realization of the bank imprint of 20% via a Specifique link. You may also be asked to pay the deposit directly at our base.

PAYMENT
The totality of the payment is made on the place of appointment with the method of payment indicated at the time of the reservation.
We do not accept payments by credit card, E-ANCV, ANCV and checks are limited to an amount of 120€ per reservation and an identity card will be required.

CONDITIONS OF CANCELLATION/MODIFICATION OF RESERVATION
The acceptance of the reservation by the realization of the bank deposit of 20%, acts as a contract and commits you to accept and respect the conditions stated below.
Cancellation without charge up to 3 days (excluded) before the activity.
Cancellation 3 days (included) before the day of the activity: the 20% bank imprint is kept whatever the reason of the cancellation. (Exception possible on a case by case basis).
Cancellation the day before or the day of the activity: the totality is due. You will be asked to pay by bank transfer. The previous bank imprint will be deducted and kept.
Any cancellation, even partial, on the D-day is due.

All reservations can be made either by phone or by mail.
No reservation is validated orally.
Your reservation is effective only after reception of a sms/email of confirmation and the realization of the bank imprint of 50% via a specific link. You may also be asked to pay the deposit directly at our base.

PAYMENT
The totality of the payment is made on the place of appointment with the method of payment indicated at the time of the reservation.
We do not accept payments by credit card, E-ANCV, ANCV and checks are limited to an amount of 120€ per reservation and an identity card will be required. Full payment by bank transfer is accepted if it is done at least 3 working days before the activity.

RESERVATION FOR GROUPS OF 10 PEOPLE OR MORE

CANCELLATION ON OUR PART

We reserve the right to cancel the planned activity at any time without any compensation. Concerned and responsible for your safety, the guide can at any time take the decision to cancel or modify the activity.
In case of cancellation, case of force majeure: bad weather, fire, etc.. The bank imprint will be cancelled or the deposit refunded. The service, if paid, will also be refunded in full, but no additional compensation can be requested.
In the event of a change in the itinerary, with your acceptance, for the above-mentioned reasons, no reimbursement will be made and no additional indemnity will be requested.
In case of cancellation or modification of the course due to the physical ability of one or several participants, no refund will be required.
In case of late arrival of participants at the meeting time, the activity may have to be cancelled and the total amount will be due as for a late cancellation.

VERDON XP & The Funny Helmets© is not responsible for theft, loss or damage of personal belongings of its clients. We ask you not to bring any valuable object during the activity and in our trucks.
The equipment provided is the responsibility of the participants. Any damage caused voluntarily or by non-compliance with the instructions will be billed.

VERDON XP & The Funny Helmets© has taken out a Civil Liability insurance contract with the Allianz company, specifically for the supervision of white water activities. This liability insurance is included in the price of the services.
Allianz I.A.R.D – 1 cours Michelet – CS 30051 – 92076 PARIS LA DEFENSE Cedex. Guarantee by contract n°: 55.885.787 subscribed by the SNGP CKDA
We ask all participants to be insured through their own liability insurance to cover certain accidents, theft, loss, damage.
All our guides, both salaried and independent, are individually insured. They also have all the diplomas required for the activities they will lead. These diplomas are visible on our base or on simple request.