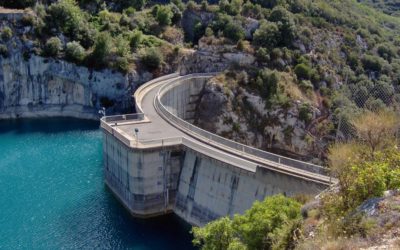 Before the construction of Lake Sainte-Croix-du-Verdon, one must imagine a valley with gentle slopes with a landscape shaped by the human presence. Lavender fields, truffle oaks, wheat fields, vines and olive trees were perpetuated there by the local populations over the centuries.

The construction of Lake Sainte-Croix-du-Verdon had been in the works since the beginning of the 20th century. After Martel’s expedition in 1905, it was Gorges Clemenceau, then president of the council of the third republic, who in 1908 surveyed the Verdon from Fontaines L’Evêque to Lake d’Allos. In other words, if we were interested in the hydrography of the valley, major projects then began to emerge.

In the 1930s, the Schneider company sought to realize the project of a large lake in Sainte-Croix. Already at the time, man was able to carry out large constructions like that of the Sainte-Croix dam. However, the bulk of the work was rather to convince the populations of the sacrificed villages to leave the place. This is why the Schneider company then encountered a fierce outcry from the villages impacted by the project. A few years of intense negotiations were initiated and Schneider preferred to abandon the project. However, this company never denied the Verdon. In fact, Schneider set up a fleet of solar panels a few years ago in Vinon-sur-Verdon.

Construction of Lake Sainte-Croix, implementation of the project

Thirty years later, at the beginning of the sixties EDF (electricity of France) brought the project back to the table. This time, it is a nationalized company with the State at its side which will carry out the project at all costs. In addition to the production of electricity, strategic interests such as the water supply of the large coastal towns are at stake.

As in the 1930s, the local populations once again voiced their dissatisfaction with the realization of the project. However, the fight this time takes on the appearance of David against Goliath. These are three villages of Provence facing the State and national interests. In addition, it should be noted that thirty years later, the rural exodus has passed through and the populations of the affected villages have decreased.

After much consultation, the decision was made in 1968. The lake rating initially planned at 500 was lowered to 482. This lowering of the water level thus saved the villages of Bauduen and Sainte-Croix-du Verdon. Only the village of Salles-sur-Verdon will be drowned.

Work began in 1969. The Verdon was then diverted into a bypass canal. The following year, in 1970, EDF began to acquire all the land that would form the lake. After a first test in the spring of 1973, Lake Sainte-Croix-du-Verdon began to fill in the fall of 1973 to reach its rating in 1974.

The village is destroyed before the lake is flooded. It was rebuilt higher up, facing the future lake, on the Bacouenne plateau. It was a very bad experience for the expropriated inhabitants of the village. The latter felt deceived by the realization of the project. Indeed, the houses which then formed the village were often old and dilapidated. The allowances granted were then up to the task. Truffle oaks, for example, were not compensated at their true value either.

Under these conditions, the inhabitants of Les Salles have not regained the life they had before the lake was flooded. The price of the houses in the reconstructed village of the “subdivision”, as the inhabitants will say, was much higher than the compensation received. Finally, the trauma linked to the tearing of the land and its houses which had seen the birth and sheltered several generations were never compensated.