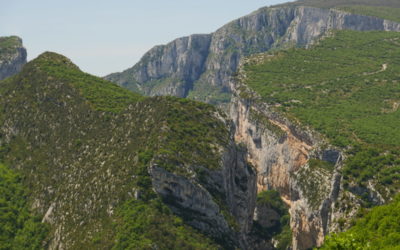 The Martel expedition was led by the French speleologist Édouard-Alfred Martel (1859-1938). He went to Haute Provence in 1905. Sent by the Ministry of Agriculture, he came to study the resurgence of Fontaine l’Evêque (today drowned in the lake of Sainte-Croix). He then turned away by the Grand Canyon du Verdon, in particular by Rougon where a team went up to explore the Grand Canyon. It is Isidore Blanc, guide of the expedition and teacher who brings together a team of villagers. The Martel expedition was launched on August 11, 1905.

The whole team starts from Rougon to reach the Samson corridor. They embark men and equipment on three frail canvas and wood skiffs. After a first day of laborious navigation, they set up camp at La Baume aux Pigeons. Barely 2 kilometers traveled.

A boat is destroyed and progress is then made by the shore. They arrive at the beginning of the afternoon at Estellier. At nightfall, they enter the corridor of the Styx, a second boat shatters sending men and equipment into the river. They then set up camp on the Imbut beach. Martel at the end of his strength then wishes to abandon the adventure. It is encouraged by the rest of the team that he manages to regain his motivation. It must be said that this represents a very big day. Going from Stix to Imbut during the night to finish off the most seasoned.

Not venturing inside the Imbut, the expedition must go around it through the chaos of the same name. Getting these cumbersome boats over the huge blocks forming chaos must have been a heavy task and particularly time-consuming. The camp is established at the end of the day in Les Cavalets.

The progression is very slow, chaos of rocks, multiple logs brought by the floods obstruct the passage. Arrived at Pas de Mayreste some men exhausted to the nerves decide to give up. It wasn’t until the end of the day that the rest of the team arrived at Pas du Galetas. Martel who was then part of it, near the Roman bridge of Aiguines (today drowned in the waters of Lake Sainte Croix) the first successful expedition of the Gorges du Verdon.

It was not until 1928 to see Robert de Joly cross the rooms of the Imbut for the first time.