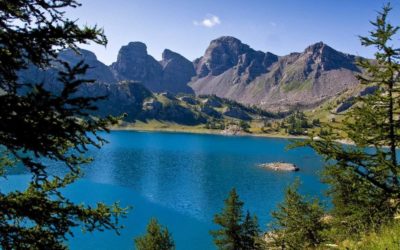 Discovering Allos lake. Where to find this gem of Haut-Verdon?

It is in the Alpes de Hautes-Provence and more precisely in the Mercantour Natural Park, that you can discover this natural wonder whose reputation is well established. Allos Lake is the largest high altitude lake in Europe. It stands supreme in the Mont Pelat massif, which rises to an altitude of 3,042 meters, between the two villages of the Haut Verdon of Colmars-les-Alpes and Allos.

Let’s get a closer look at the most beautiful lake in the region.

Located at an altitude of 2,228 meters, it spans over 54 hectares and reaches a depth of over 48 meters. Allos lake was carved out 20,000 years ago by a glacier. It alone represents a natural water reserve of nearly 15 million cubic meters. Partly taking advantage of the snowmelt, it is frozen from November to May. The lake water remains particularly cold and very poorly oxygenated. As a result, Allos lake is not very fertile and therefore poor in plants. This floristic deficiency has the effect of producing water that is very transparent. It becomes like a mirror which reflects the color of the sky. This is why the water in Allos lake is so blue! Thank you mother nature!

Its flora and fauna that make it so wild

If the water of the lake is devoid of flora, this is not the case of the banks which conceal an exceptional fauna and flora. There are two species of cold-water salmonids. Brown trout and arctic char found refuge in the lake. Outside of the water, nature reveals all its charms with many species of mountain flowers. In the sky, the griffon vultures of the Verdon are constantly looking for the best thermal currents to fly above the lake.

You can also see populations of ibex and chamois. Indeed, these animals greatly benefit from the protection offered to them by the Mercantour National Park. As soon as the snow melts and the first rays of spring, it is the marmots that stick out their heads. You will hear them whistling all summer long.

The little secrets of Allos lake

At the edge of the lake we find the chapel of Notre Dame des Monts, entirely dedicated to the Virgin Mary. It adopts a particular architecture, it blends in perfectly with the natural setting offered by Allos lake.

The lake’s “drainage system” is also unique. The waters of Allos lake escape quite naturally through the 600 meters of underground canals. And this, up to the source of the Chadoulin which joins up after our beautiful Verdon river!

Like any historic and exceptional place, Allos lake also has its legend. It is said that in the middle of the lake there is a stone carved by the ancients. We can read the following saying: “quouro mi veiras, plouraras” or “when you see me, you will cry”. It must be understood that if the level of the lake were to drop in order to find this stone, the impact on humans would be very serious. This highlights the importance of this water reservoir in the middle of the mountain.

A compulsory visit during your stay in the Verdon

You will easily be tempted to go and discover the wonderful Allos lake. On the other hand, it is essential that tourists and nature get along and live together perfectly.
The question of regulations then arises. While almost 60,000 visitors were recorded in three months during the summer, it goes without saying that this over-attendance is not without consequences for the site, its flora and fauna.

Access to the site has therefore been regulated. It is forbidden to ride a bike or take your drone there. Doggies must be kept on a leash. Picking is prohibited as well as noise pollution and camping.
If you want to discover this jewel of nature, we advise you to favor the month of June or September to go there.
Access to the lake cannot be done directly by car. Several car parks are located before this one. It takes between 45 minutes and 2h15 of walking (one way) depending on the car park chosen. The tour of the lake is done in 1 hour.

Although the difficulty is less, you will be climbing in the mountains so do not forget your walking shoes, hat and water bottle.
For the less athletic, don’t panic! The Allos lake refuge will allow you to eat thanks to a family kitchen and to hydrate yourself during a break in front of the largest high altitude lake in Europe.