Lac de Castillon, test base for the DGA 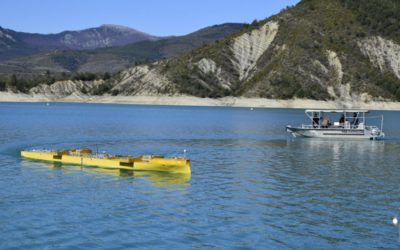 Some will say; “The Verdon is not very populated, but you can see everything there” and they are right! We are talking to you today about a military test base which could well be the setting for a new episode of Mr Bond and his acolytes (by enlarging just a little …) It is by the side of the road, near from the junction that leads to Demandolx. Dominated by the Mandarom site on the right bank near the Baume above the lake. On the left bank, it is the dam itself which serves as the backdrop to this unusual space.

Question navigation, one would be tempted to think that it is the soldiers who forbid us access. Indeed, the space reserved for pedal boats on Sirocco beach touches the navigation area of ​​this base. However, seeing that the dam is part of the scenery of it, we can imagine that it would be impossible to go for a walk in this area. The lake is therefore cut in two. You have to go as far as Saint Julien to be able to enjoy the waters of the lake again.

A historic test base

Since 1959, the Directorate General of Armament has had a test site on Lake Castillon. Attached to the technical DGA (Directorate General of Armament) of Toulon, this site specializes in sonar and acoustic tests. Indeed, it is not enough for a submarine to descend into the depths of an ocean to pass unnoticed. The progress made in recent years in sonar listening has made it possible to identify these buildings without seeing them on the screen. The DGA site in Castillon will therefore allow technical details to be refined, making our national submarines more discreet. This place remains nonetheless confidential see .. secret defense. Even during an official visit, you will never be given many details. Just like the names of the people who work there, you will only meet first names there.

Lake Castillon appears to be a unique site in Europe, due to the tranquility of its waters. The physiognomy of the lake; a bottom covered with several meters of silt as well as steep slopes provide almost zero background noise and make it possible to attenuate the echoes. Add to that a calm body of water and you will understand that this place was chosen to be devoid of sound parasites. The test base is therefore installed on both shores of the lake. They are connected by a metal ramp that can be seen coming out from each side. It is on this ramp that are fixed the 37 hydrophones which allow the study of the noises emitted by the machines. Everything interests them, whether it is the noises emitted by the propeller, the noises emitted by the flow of water along the hull or even the noises emitted inside the submarine itself.

However, it is difficult to see how to immerse monsters over a hundred meters long in the lake. The engineers found the solution. These are models that are used, the famous yellow models. The latest is not that of a submarine but that of an aircraft carrier. It is the model of the aircraft carrier that will replace the Charles-de-Gaulle which is being tested at the moment.