Fly in the Verdon! Paragliding, hang-gliding and glider 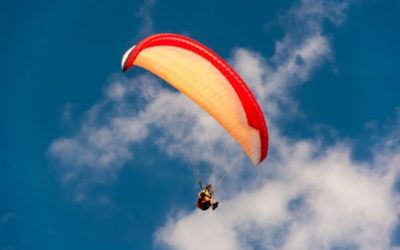 Fly in the Verdon by paraglider, hang-glider or glider … It’s time to think about looking above us, in the sky! Or rather, from the sky … Observing the beautiful Verdon valley from the air, Icarus’s dream.

I remember that just a year ago, I had the chance to see the region from the air. Not exactly paragliding but rather close to ten thousand meters above sea level, in an airliner that took me from Munich to Barcelona. After enjoying the most extraordinary views of the snow-capped Alps, when I thought to myself that we might be going over the Verdon, I recognized the Lac de Castillon then the Roc de Castellane. Then we flew over the Grand Canyon du Verdon, the river that winds at the foot of huge cliffs. then the Valensole plateau and its lavender fields, a magical moment!

Back on topic. We are going to tell you here about some places to fly in the Verdon. But lower than in an airliner and above all, without an engine! Or very light only.

Many players are present in the territory of Verdon. Indeed, we can find providers in Castellane, Moustiers Sainte-Marie, Saint André les Alpes, Valensole, Entrevaux (Var), Puimoisson .. We will focus in particular on two diametrically opposed territories in the Verdon valley that are the sites of Moustiers Sainte-Marie and Saint Adré les Alpes. Finally, we will push to the end of the Verdon, in Vinon-sur-Verdon exactly where there is a gem of Gliding.

The town of Saint André-les-Alpes has a flight site whose reputation has largely gone beyond the French borders. Indeed, Saint André-les-Alpes benefits from exceptional weather conditions and in particular from particularly popular thermal winds. In addition, the developed site of Mont Chalvet (1533 meters) recently hosted the European free flight championships as well as a round of the world championship in 2016. The Aérogliss paragliding school is located very close to the site of landing. It is the FFVL referent of the place, they offer baptisms in two-seater and introductory or advanced courses.

Fly in the Verdon at Moustiers Sainte-Marie

Much further downstream, very close to Lake Sainte Croix-du-Verdon, the climate is much more Mediterranean and the climatic conditions are particularly favorable for aerial sports. Various sites and service providers are located around the village of Moustiers. You can thus practice paragliding or free flight in tandem, internship or in autonomy and fly over the magnificent village of Moustiers as well as the second largest artificial lake in France.
Hot air ballooning can also be practiced with discovery flights over Moustiers Sainte-Marie and the Valensole plateau. You can also fly over the Gorges du Verdon.
Puimoisson aerodrome, very close to Moustiers, also offers glider flights (gliding).

At the end of the valley, in Vinon-sur-Verdon, the Verdon flows into the Durance. This is where the Association Aéronautique Verdon Alpilles is located. A very modern glider and glider flight school. The AAVA, with its three runways as well as numerous facilities, even specializes in mountain flying. Fly in the Verdon and it is the sky of the southern Alps that awaits you!