Rafting and flora of the Verdon observed 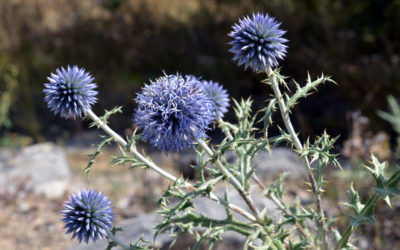 To practice a white water activity like rafting on the Verdon is also to discover its flora. In fact, more than 2,000 plant species have been identified in the territory of the PNRV. This represents a third of the number of species that can be found in France. The territory of the Verdon Natural Park represents only a third of a department. That is to say the rich flora which conceals the Verdon! We won’t talk about everything in this modest article. We will focus more specifically on rafting and the flora of the Verdon. In other words, to the flora that we meet while practicing our activities in the Verdon.

The flora in the Grand Canyon, a particular stage

The peculiarities of the microclimate and the reliefs play a huge role in the diversification of environments and species. Upstream of the canyon, there is a classic tiering of flora. First, there is the green oak grove on the edge of the cliffs. Above, there is the white oak, then the beech. Finally, at the top of the slope, there is the beech forest with yew trees.

Once in the canyon, everything reverses! In fact, going down towards the river, the light decreases just like the temperature while the humidity increases. This particular phenomenon leads to an inversion of the vegetation stages. Below the green oak grove encountered on the edge of the canyon, we will therefore find the white oak grove then a beech grove or a maple slope. At the bottom of the canyon, freed from Mediterranean constraints, the yew finds an almost mountain atmosphere.

Protection of the flora that can be found in the Verdon

Knowing how to preserve this flora is a major asset for its protection. This is why we present here some rules of common sense which allow nature to suffer less on our contact.

-A good photo will cross time better than a bouquet that dries in the sun and that sooner or later will end up in the trash.

– Harvest only those plants that can be identified and that can be ensured that they are not protected.

– cut the plants as cleanly as possible using a knife or scissors.