In Castellane, the Pétardiers Festival at the end of January 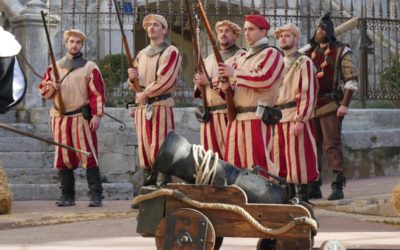 The Feast of the Pétardiers

In Castellane, every last Sunday of January, we commemorate the Feast of the Pétardiers for nearly 450 years ..

At the end of January, it is very cold in the streets of Castellane and the city is almost deserted. This Pétardiers Festival is therefore an opportunity for everyone to meet. We organize a theatrical reconstruction of the event with loans of period costumes. You can also enjoy a dance and music show. Raptor demonstration, medieval catering, mulled wine …

Before coming to the facts that took place on January 31, 1586, let us return to some remarkable episodes of that troubled epoch that opposed Chatolics and Protestants at Castellane.

It was in 1559 that the first war unrest of religions broke out in Castellane. Brun de Caille having converted the Castellane family to Protestantism. In the summer of 1560, a Protestant captain named Paulon de Mauvans plundered the city. Then he moved there after signing an agreement with the governor of Provence. On October 4, 1574, a new attack by the Protestants was repelled by the Castellanese and the inhabitants of the neighboring villages.

The day of the attack in Castellane

Les Pétardiers, January 31, 1586. Protestants represented by the Duke of Lesdiguère and the Baron of Allemagne en Provence at
the head of their troops marched on Castellane. They attempted a surprise attack in order to take and plunder the city again.
Judithe Andrau, who comes from Barréme, her place of residence, sees the troops in the forest and is quick to raise the alarm when arriving
in Castellane.

The Castellanians without military support then had to organize their own defense against the attackers.

There is not much left of the historic siege. We do know that the same Judithe Andrau, heroine of the day, killed Jean Motte, the captain of the attackers. Indeed, she threw a boiling-weight cauldron over his head from the top of the Annonciade door. This door which still exists today was at the time the weak point of the city. The Barron of Germany, meanwhile, was shot in the back. This ended the retirement of the Protestant attackers.

A last Sunday in January, therefore rich in animation for several centuries already. Long before tourism made the glory of Castellane in summer. Come in large numbers in January, if we lack costumes, there will always be neoprene suits!