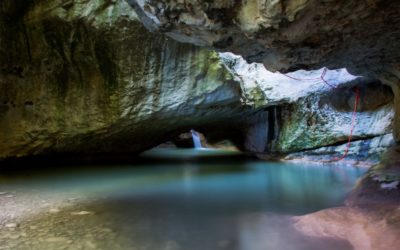 “Jabron” comes from the pre-Celtic base “gava”, which means “mountain streams”. There are thus several “Jabrons” in France.

From Castellane, you take the D4085 road towards Grasse. Once you have passed the Col de Luens, you will arrive at “La Bâtie”. In front of the hamlet, you take the small road indicated in dead end. You pass the speed bump and you arrive at a small parking lot. This is where you will have to leave your car.

The Jabron takes its source near Peyroules then crosses the villages of Châteauvieux, Brenon, Jabron and Trigance. After 32.2 km, it ends its race in the Verdon at the Pont de Carajuan, in the town of Rougon.

Dangers of the Haut-Jabron canyon

Like all canyons, Haut-Jabron can present real dangers. In fact, in the event of rain, the nearby watershed can very quickly saturate the Haut-Jabron gorge by creating a “water flush” effect. You will therefore understand that it is strongly recommended not to enter the canyon if it is raining. Thus, on June 15, 2010, we recorded on the Jabron a maximum instantaneous flow rate of 109 cubic meters per second, ie a height of 452 cm! For more information on canyon safety, you can also follow the recommendations of this very good specialized site.

Evolution of management in Haut-Jabron

Canyoning first appeared in the 1980s. It was at this time that State guide diplomas also began to be implemented. This is why in the mid-90s, it was still possible for guides graduated with a state canoe-kayak certificate to frame the Haut-Jabron canyon. Indeed, we practiced it in the “Aquatic Hiking” version, ie without harness or abseiling ropes. Since that time, the legislation has evolved. Indeed, since it is mandatory to take one or two steps of de-climbing on the course, the classification of the Haut-Jabron canyon has changed from V1 (Aquatic Hiking) to V2. This is why it can now only be supervised by accredited “Canyon” guides.

Approach walk to the Haut-Jabron canyon

The approach walk, compared to the length of the canyon itself, is quite long. Allow about 30 minutes of walking to reach the entrance of the canyon. Walking in itself is not unpleasant. It is done on flat and shaded ground. For a discovery; formidable! You will have a very good bucolic moment in the Alpo-Provençal forest. Some guides doing this walk twice a day for many years have chosen to switch to cycling.

Evolution in the Haut-Jabron Canyon

We get to the heart of the matter very quickly. After a few dozen meters, you arrive at the top of the first slide of more than 3 meters. Even if it does not present any danger, we will be very careful not to try to brake with our feet during the descent. The reception of this slide is done in a large, deep and cool basin!

The rest of the course is along a very deep corridor, which leads to the second slide. About 6 meters long! Nothing dangerous, adrenaline guaranteed.

There is also a handrail that allows you to bypass this slide. Possibility of jumping from a platform located 4 meters high.

We then weave our way along a narrow tube in order to access a new jump about 5 meters high. Then possibility of pendulum abseiling over 10 meters.

You only have a few meters of vertical drop to go up to the start of the canyon. And voila, the circle is complete! Another half-hour walk to find your vehicle. It is certain, the Haut-Jabron canyon will leave you with beautiful memories.